I separate the Panthéon in 3 parts: the principal level; the crypt and the upper level. 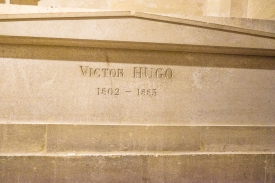 As Antoine de Saint Exupery dramatically vanished without a trace in a fly mission, he was not interred, but has a plaque in the principal level of Pantheon. We all know his “Le Petit Prince”.

The aviator and writer Antoine de Saint-Exupéry was honored  December 13, 2016, at the Pantheon, where a commemorative plaque is dedicated to the author who disappeared in the crash of his plane in the Mediterranean Sea, July 31, 1944. In the presence Ministers of Defense and Culture, it was also an opportunity to celebrate the 70th anniversary of the French edition of the “Little Prince”, the most widely read and translated French literary work in the world after the Bible.